The student project Speak in ASL (2005) is a hilarious candid video, depicting a compromise of communication between two worlds in which two native ASL speakers approached a hearing person in public and conversed with them in American Sign Language as if they were on Eyeth rather than on Earth.

This piece of work Speak in ASL contemplates colonialism and hegemony of a language and culture in general. Mark Tully once noted in his No Full Stops in India, "It has often been said that if you want to destroy a people, first destroy its language." 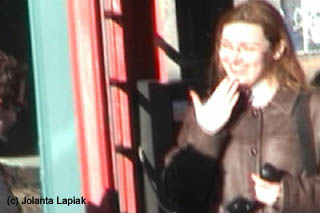 Although this Speak in ASL by Jolanta Lapiak was made humorous, it's the reality for Deaf people. We communicate with hearing people all the time by pen and paper. I think Deaf people got a laugh out of the video; it made me feel good about myself. While humorous, it does reflect the lived experience of Deaf people who are put in the position of communicating with hearing people using tools of pen and paper. I noted that this video clip portrayed male characters, not female; perhaps this reflects the male dominant society. This vignette, based on humour, has been efectively done to show cultural and gender differences on a program called, "Laugh Gaps" CBC Quebec." -- Teresa Fleming, 2005.