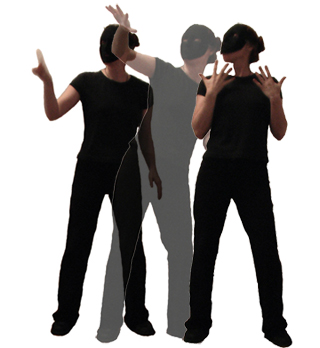 My live performance Ameslan, coughing English, Ameslan, originally took place in a graduate class at NSCAD University in September 2005. I performed in the recessed niche of a white wall.

The first, introductory part of this performance was a poetic text in Ameslan. In the second part, the performance turned into signed English, which led to a choppy monotony before I began to cough and broke into the third part in Ameslan.

Artist Statement: This performance is an analog to what Alan Watts describes the following: "Alphabetic writing is a representation of sound, whereas the [Chinese] ideogram represents vision and, furthermore, represents the world directly." Watts believed that it would be a disaster to "rationalize" Chinese by introducing the phonetic alphabet to Chinese speakers/writers. Likewise, oppressing Deaf Ameslan children into using Sign English or Sign Exact English (SEE) would be as absurd as coercing Chinese people into writing Chinese characters in English grammar, as illustrated in the the middle part of my performance. It is more realistic for Deaf Ameslan children to be naturally bilingual, learning both English and Ameslan/ASL.

"Deaf children, who are taught Sign English, nevertheless would inevitably shift into its grammar, as illustrated in the coughing part of my performance. Elissa Newport and Sam Supalla, in their research studies describe that, 'children construct grammatically perfect ASL even when they are exposed (as they so often are) to somewhat less than - perfect ASL - a clear illustration of an innate grammatical competence in the brain.'" (Sacks p 111) -- excerpted from thesis statement