Unbeknownst to me of the future tragedy of the tsunami of 2004, I created this untitled experimental video poem in 2002. Then, coincidentally I spent days during my college winter break on the beaches of Goa, India, during the Indian ocean 9.1 earthquake and tsunami on December 26, 2004. My art college instructors were concerned, and my parents were sick worried whether I was safe till I replied to their emails from India.

This video poem, then untitled in 2002, was inevitably associated with my trip where the tsunami occurred nearby so it was titled "Tsunami". 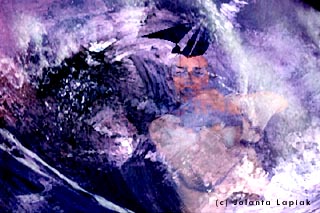 To manifest a vision on the concept of digital motion painting, the experimental video Tsunami: visual poem was created in a digital mixed media of digitized painting, images, and video performance in the form of visual poetry.

The visual effect, motion, and color evoke emotion in visual music, like audio music. The idea of vibrational music was later evolved into the future work, Sweet Nightmare (2004).

"Did you know: The 2004 Indian Ocean earthquake and tsunami is the seventh-deadliest natural disaster in history by estimated death toll (280,000)." --" wikipedia.org