Sweet Nightmare is an experimental video-music performance, featuring a reality within reality and a loop of distorted time-space. It emphasizes on both visual-based and vibration-based music as an alternative view of music, first composed by myself as ASL signer. It bends a traditional semantic of music.

Music, inspired by the chaos and fractal theories, is a central experiment in this work of art. As music is associated with rhythmical fractals as found in everything in life from mountains and ferns to vibrations and behaviours, the video experiment deconstructs a traditional notion of music which typically is associated with sound. 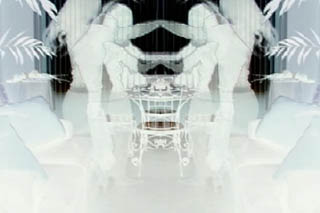 In the visual element, the music is based on editing cuts, repetitions of images, dances, hand movements and other visual images. In the sound component, vibrations were edited in tune with visual music, regardless of how sound would fit it, as opposite to the traditional process of editing sounds regardless of how vibration might fit.

"In the past few years, molecular biologists have discovered that a major fraction of DNA is composed of repeating sequences. Dr. David Dreamer, a molecular cell biologist at UC Davis, and Riley McLaughlin, a synthesist, have developed a system for translating these sequences into music. By assigning musical notes to each of the four bases, they have found that various DNA templates resound with the cosmic boogie of the human biocomputer.

"What is the sound of the genetic code? It depends on the source of the DNA. Cow DNA has a repeat of twenty-three bases and gives a lilting feeling when played. A bacterial clone features a clear melodic riff derived from its simple five-base repeat. And a three-hundred-base sequence found in human DNA produces a beautiful melody in a distinctive waltz signature." - Mondo 2000. HarperPerennial.