The video Lip Dancing (2003) appears to be a simple form, yet behind this surface, there is a lot more than this.

One of a few unedited originals.

A hearing friend and intermediate ASL learner Kevin handed me his poem Rising Sun specifically written for me to translate. His poem was written in English glosses but in ASL grammar. He said, "I want to see what it looks like in your signing (American Sign Language)." With his permission to use his poem, I took further by creating a work of art for another purpose.

The experience of translating his poem was interesting that it was not my voice. I became his voice and experienced his voice. I was, in part, his extending medium like a typewriter, paper and pen, or another writing instrument. Transmutation. 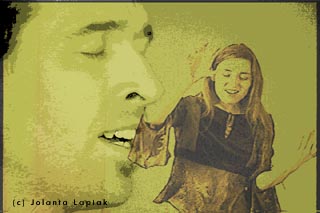 This video for my art class contains the visual-manual speaker myself and the vocal-auditory speaker yet there is no audio. He is silent; on the other hand, she is non-silent. What does silence mean? It undermines the notion of the meaning of silence -- not the absence of sound but the notion of emptiness.

One of the common comments I received from the artists (viewers) is that the signing (not misspelling for 'singing') is like dancing, that is like "hand dancing." For a moment, this was disturbing. Why? This offending term "dancing hand" turned out to be a gem in disguise that this made me think further.

After contemplating for some time about their view and about my reaction to their view, I tried to explain my reaction and their view. Finally, I came up with the title, "Lip Dancing".

This led me to thinking further about what "dance" means and what choreography can do. Later some of my works include some experimental choroegraphic elements in languages, including Ameslan (ASL) and English, such as Lone Poetry, 2006-07. Also, a few later videos were produced on the theme of music from a different perspective.