"Barbwire and Bloodstain of Word"

A large circle of paper barbwire consists of the chain of torn, dictionary pages. It represents a watchful defense of logos (the Greek term for god, truth, speech, reason), where iconoclasm, signoclasm, and phonocentrism existed throughout the history. Sign language has suffered from the oppression of speech language. 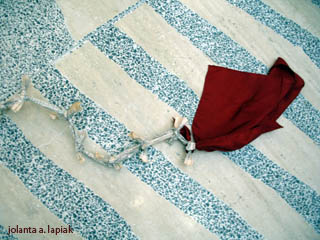 The poetry artist began at the front of a red kierchief at her feet. As she journeyed around the circle, she stopped at each point of the circle and narrated a chronicle of selected key events in elegant, poetic Ameslan (ASL). 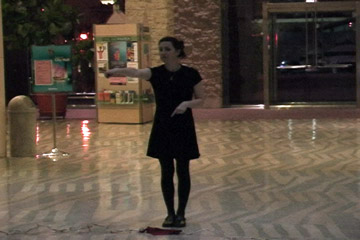 The artist performed a narration of timeline from the ancient Greek to the infamous Milan 1880 (which crashed the privilege of sign language), from the top to the bottom of the circle. 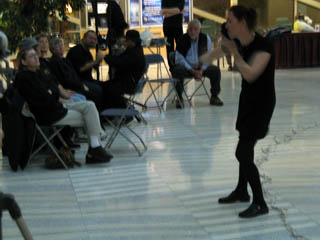 As the poetry artist reached the half of the circle at 1850 and 1880. She described a success in the 1850s, where there were deaf lawyers, politicians, writers, artists, professors, teachers, etc. who used sign languages. Success crashed down after the infamous Milan 1880. She continued with the rest of the circle from the 1960s to the 1990s. 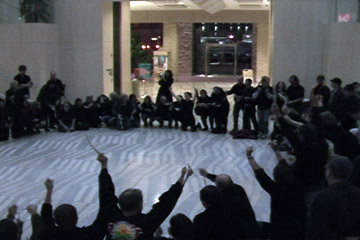 September 28, 2007, she reached the red point where she celebrated ASL with the audience. She invited the audience to join in the circle. She narrated a memory of the signoclastic pains that metaphorically bled through the barbwire thorns. 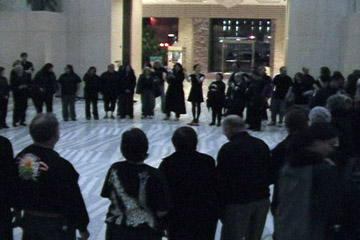 The chained paper represented both bondage/suffering and unity/freedom. She invited the audience to hold the barbwire (armcrossed). Everyone is ruptured the barbwire (bondage) for freedom (unity).